Happy New Year!
Well after a brilliant restful trip in Barcelona I've come back to the grey and cloudy London! 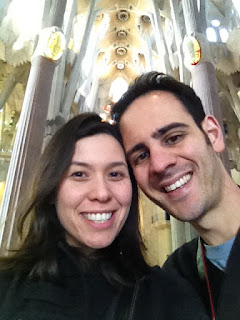 Pic : Greg and I in La Familia Segrada Church, Barcelona

Today seemed a good day to begin the 2013 blog as I had my first audition today (commercial) and possibly because of that it started to feel like the beginning of the year!

At this point I've got several projects that are lined up for 2013 both acting and producing wise.
The most exciting one being 8 The Series which has just signed with Koldcast.
Read the exciting news below:
http://blog.koldcast.tv/2013/koldcast-news/5-reasons-to-discover-internet-tv-in-2013/

In the next few weeks we hope to have more information on when you can start to watch 8 The Series as we sort out production dates!
For more info see:
www.facebook.com/8theseries
www.littlejadeproductions.com

In other news there are several long term projects that I am beginning to focus on now including the ones below. Its exciting to start a fresh page in a new year and I hope to finalise some of these projects in 2013!

Short Film: A Perfect Soldier:
A Soldier, A Scientist and A Turncoat meet in a room. This short film is based around the recent development of experimental DNA based toxins and their impact upon the world

Book: P City
Providence City is a cyberpunk novel centred around Providence the daughter of a high ranking Mob Boss Alkemides. Set on a distant planet where extreme heat from the sun literally bakes a person dry, the cities are protected by Atomoshields. Which keep temperatures similar to those of Old Earth. However this system is run by The Council in A City, who have totalitarian control of these colonies. When P City's protection is revoked Alkemides takes over the running of the survivors in P City. However The Council does not approve of them surviving. The Council wants P City destroyed, and send in armed forces to destroy whats left. Pressures from southern gangs and the original inhabitants of the planet all start to combust within the city limits and its up to Providence to figure out how to save her city.....