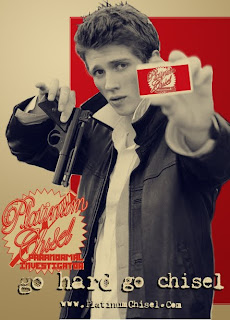 We got in. To Cannes that is!
Its official, my first short film (as sole producer) Platinum Chisel has now been accepted into the Cannes Film Festival Short Corner!!!

I cannot tell you how excited and happy that makes me.
All the long..….well, I mean everything, the long process really!
Its actually over a year since we first started work on the film. I think I first came up with making Platinum a film in January 2009, and approaching Mike Lewis our writer around then…back in Sydney back at Sydney Theatre Company.
And now in March 2010 after career changes, changing continents, moving to 3 different places to live, and touring for 5 months around australia and that’s just me. My director had holidays, moving house, computer blowing up (yeah really).

Now finally I feel like the hard work is paying off, and it’s a GOOD feeling!

I just found us on the Short Film Corner's catalogue:

http://www.shortfilmcorner.com/sfcfilm/filmfiche2.Aspx?id=13749596
That is just surreal!
So while we gather our breath, gather our courage and our sales pitches. Look out for us at Cannes Film Festival 2010
Go Platinum. Go Hard, Go Chisel.

www.platinumchisel.com
Posted by Jade Alexander at 08:37